In this edition of the Plane Crash, we’ll do another Classic Aircraft Trivia game.  The rules are as follows, anyone who breaks them will lose… or something like that.  CHEATING IS STRICTLY PROHIBITED, as according to the Backyard Football Sudden Death Overtime Rules.  Rule number one: First team to score wins.  Rule number two: Uh, there is no rule number two.  Rule number three: see rules #1 and #2.  Please send me your results via a “comment” box.

1. What is Britain’s most beloved aircraft?

2. What airline is based out of Vancouver BC?

3. What was the original competitor to the de Havilland Beaver?

5. What is the greatest floatplane ever?

Bonus question: What Canadian squadron is the Winnipeg Jets NHL team named for?

In this edition of the Plane View, we’ll take a look at the British hero aircraft.  As the British “royal baby” has recently been born, I thought it would be fitting to do a post on the British aircraft fame.

Dating back to World War 1, England has been a world leader in the aircraft industry, with such greats as the Sopwith Pup, Sopwith Camel, Sopwith Snipe, the age-opening Sopwith Triplane, Royal Aircraft Factory FE.2b, and Royal Aircraft Factory SE.5.  The famous Sopwith Camel, flown by such greats as William Barker, Roy Brown, Wilfred “Wop” May, and Snoopy (on his doghouse), was much like the German Messerschmitt Bf 109 Gustav, in the fact that both were feared by the enemy and the pilots.  On the other hand, the Sopwith Pup was arguably the sweetest of all World War 1 aircraft to fly.  The Royal Aircraft Factory SE.5 was the Supermarine Spitfire of World War 1, about as high of praise as a plane could get. 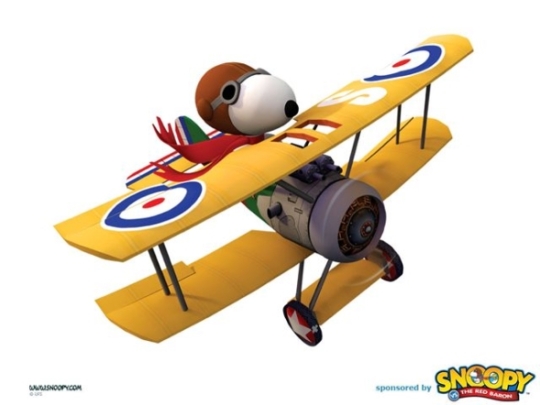 A picture of Snoopy in his Sopwith Camel

In World War 2, England was still on top.  The enemies were mostly the same, with Germany as the main, but Italy was Axis, as was Japan.  France, who had been the second toughest country of WWI, was now disgustingly crummy, and Canada was rapidly rising, never to drop.  But despite the Hawker Hurricane, Supermarine Spitfire, Supermarine Seafire, Hawker Typhoon, Hawker Tempest, Grumman Wildcat, North American P-51 Mustang, Blackburn Skua, Bristol Beaufort, Bristol Beaufighter, Avro Lancaster, and de Havilland DH.98 Mosquito, the Germans had the Messerschmitt Bf 109 Gustav, Focke-Wulf Fw 190, Junkers Ju 87 Stuka, Junkers Ju 88, and Focke-Wulf Fw 200 Condor; the Italians had the Fiat Falco and Macchi MC.202 Folgore; and the Japanese had the Nakajima B5N Kate, Nakajima Ki.43 Oscar, Mitsubishi A6M Zero, Mitsubishi G4M Betty, Kawanishi N1K1-J George, and Kawasaki Ki-45 Nick.  But in the end the workhorse Hawker Hurricane, and the greatest fighter in history, the beautiful little Supermarine Spitfire, surpassed them all.

And now, Britain still is one of the top airpowers, as the Panavia Tornado, the most radical current aircraft, has been accepted widely and is in the country category of INTERNATIONAL(as said by Robert Jackson).  It could be the greatest aircraft of the coming years, currently hardly surpassed.

PS- this picture below is from a trip my family went on 7-22.

My family in Cannon Beach.

As I have recently come home from a vacation from April 11th to the 14th, I do believe that I should write about it.  I hadn’t been to Washington, D.C. in eight years.  In this edition of the Plane View, (which I had a bit too much of while flying), we’ll take a look at the world’s two largest air museums: The well-known Smithsonian National Air and Space Museum on The Mall, and the Stephen F. Udvar-Hazy Museum in Chantilly, right by the Washington-Dulles airport.

The Smithsonian National Air and Space Museum is quite splendid, and it is in my top three favorite air museums.  As my camera was not working well, I was only able to get a few pictures.  Here’s the only one that turned out.

Me in front of the Smithsonian National Air+Space Museum.

The Stephen F. Udvar-Hazy Museum is also in my top three favorites.  I do believe that I have enough pictures for this.

Colonel Tibbets’ Enola Gay, which he named for his mother.

The Space Shuttle Discovery, at the Stephen F. Udvar-Hazy Center 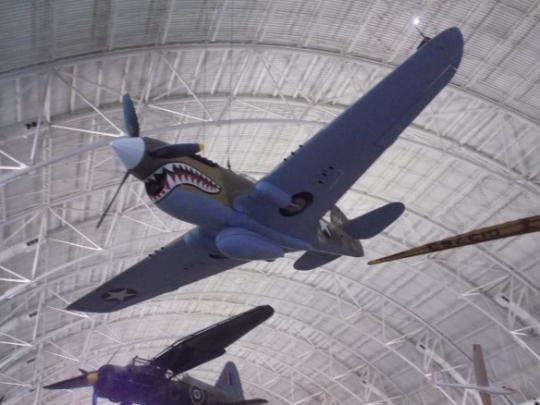 The P-40 Warhawk at the Stephen F. Udvar-Hazy Center.

The Grumman F6f Hellcat at the Stephen F. Udvar-Hazy Center.

The Republic P-47 Thunderbolt at the Udvar-Hazy Museum.

Me in front of the Udvar Hazy’s Lockheed P-38 Lightning.

They also have such brilliant aircraft like the now replaced Intruder, Phantom II, and the state-of-the-art Lockheed Martin F-35 Lightning II.

The Intruder at the Stephen F. Udvar- Hazy Center. 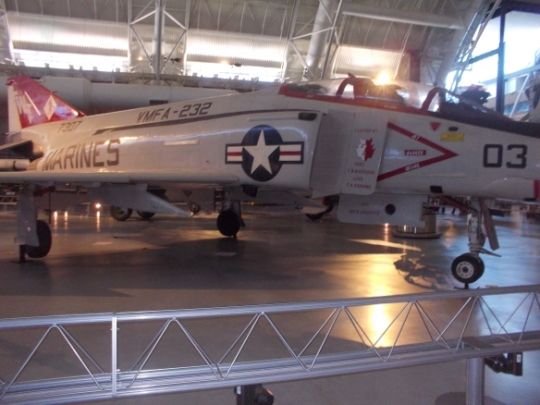 The F-4 Phantom II at the Stephen F. Udvar-Hazy Center. 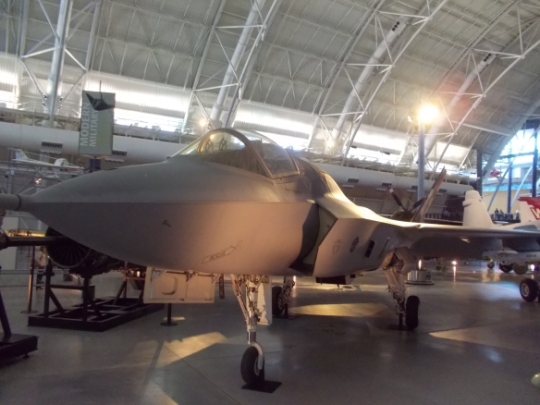 The Lockheed Martin F-35 Lightning II at the Udvar-Hazy museum.

We did indeed have a splendid time in D.C.  My sister Katrina (www.edelweisspatterns.com) had us on the list to tour the White House, but when the tours closed, due to things like golf trips costing millions of OUR tax dollars, that of course, stopped.  In the Denver International Airport at about 4:20PM on Thursday, April 11th, my sister Katrina received an email from a senator’s (not Ottawa Senators) assistant giving us the option of the Spring Garden Tour.  On Saturday, April 13th, we got the tickets, and went straight to the tour at 12:30.  It was most splendid, along with the Army Band.

The Piper Grasshopper of the Stephen F. Udvar -Hazy Center.

The SR-71 Blackbird was the main secret service aircraft in controlling Communism, and was greatly loved by its pilots.  It was used mainly during the Cold War.  Many air museums will have it, such as Evergreen, The Museum of Flight, National Air and Space Museum, and perhaps Udvar Hazy. 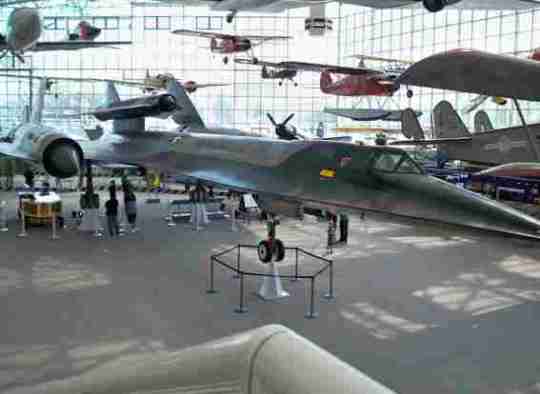 Designated the RS-71 Blackbird, it was called the SR-71 Blackbird after President Lyndon B. Johnson accidentally called it the wrong thing.  The aircraft is still often remembered as the main spyplane that helped the U.S. defeat the Soviet Union.

Forty-eight years have passed since it was first flown, and most are still in tip-top shape, despite being retired.  Now, the main aircraft patrolling enemy skies are such airplanes as the Global Hawk, and now even satellites are being largely used for such matters.  Once thought to be the greatest aircraft invention during the free-spending Reagan years, the Lockheed Martin F-22 Raptor is now being forced to go through many changes.  One main problem is that the pilots don’t have good enough G-suits, so many were passing out.  But many are still patrolling home skies.  Other main aerocraft in home skies is the now retiring McDonnell Douglas (later changed to Boeing) F-15 Eagle, the General Dynamics (later Lockheed Martin) F-16 Fighting Falcon (a.k.a. Viper), the McDonnell Douglas (Boeing) F-18 Hornet/Super Hornet, and the Lockheed Martin F-35 Lightning II.  Many great airplanes are still in the sky.

Please leave a comment if you have any questions.

Welcome to my blog!

Welcome to Isaiah's airplane blog. You will find many references to my favorite flight schools, and maybe even a little about my hockey games. I am currently studying for my private pilot's license and hope to get an ATP rating. Have a great day!

Search in the Box Below: